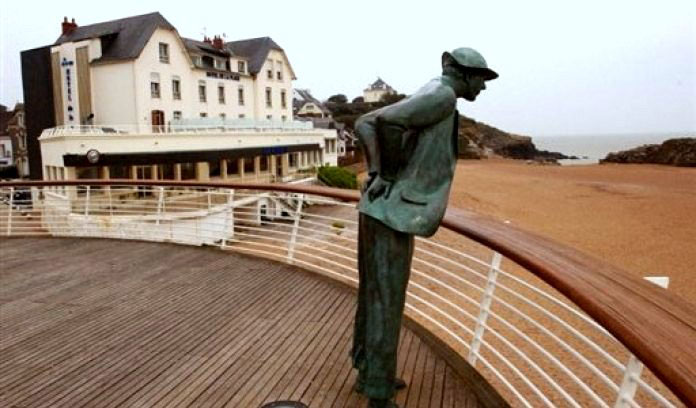 Seven kilometres from the centre of Saint-Nazaire, there is Saint-Marc-sur-mer, and its very pretty beach... after long research aimed at finding "a small town frequented mainly by modest summer visitors, large families and regulars" Jacques Tati had finally chosen this beach as the location for the shooting of the famous "Monsieur Hulot holidays", his character setting up his suitcase, his fishing rod, and his shrimp net at the Hôtel de la plage.

In memory of this "cult" event, a statue of Mr. Hulot was installed, supported by a railing and looking at the sea, with the Hôtel de la plage not far away, as in the film.

And, of course, Mr. Hulot has his inseparable pipe...

Yes, but it is a tempting object, and easy to break to take it with you and place it on some living room shelf!

So... it was broken, then replaced, and it disappeared again, and it was replaced... rumour has it that seven pipes were successively stolen, then replaced, until the municipality gave up. And things have remained that way for about ten years.

Claude Evin, the law of the same name, RATP... and Mr. Hulot's pipe

In a very unusual way, Claude Evin, the author of the Evin law, former deputy of Loire-Atlantique, opposed the application of his own law by RATP.

Indeed, a poster advertising campaign was to take place in the corridors of the metro, and represented Mr. Hulot with his famous pipe, which, by law, was censored and replaced by a small graphic element.

"This is the use of an image that is not intended to develop tobacco advertising. It is a visual that has become part of the public heritage and is part of film culture," said the former MP, judging that his law did not have to be applied in this case.

The little house on the meadow