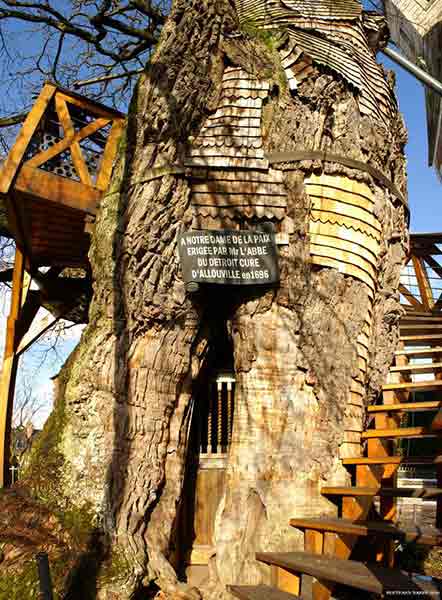 Yes, by letting his mind wander... indeed, through thought, one can wonder what the places were like in Charlemagne's time, since he was probably a contemporary of the tree in front of which we are standing!

According to legend, this oak was planted in 911 for the birth of Normandy, scientists dating it rather to the ninth century.

He would have seen the soldiers of William the Conqueror, soon to be Duke of Normandy, pass through....

The Allouville oak, religion and Terror

However, as early as 1696, there was a written record of it, the village priest slipped a pious image through the slit that gradually opened in the trunk of the Allouville oak tree, and dedicated the tree to Notre-Dame de la Paix.

Obviously, under the revolution, it did not rain, and it was in great danger of being burned as a symbol of the very power of the church!

But the teacher has an idea: instead of the dedication to Our Lady, he puts a pretty little sign on which he wrote "Temple of Reason", and, under the impulse of reason, undoubtedly, the problem is solved!

The oak, later, came back in favor since the Empress Eugenie, wife of Napoleon III, offered her a gilded wooden statue of the Virgin, which adorns the microscopic chapel (1.75 metres by 1.17 metres!) located inside the trunk, topped by an equally microscopic chamber.

It was in the 19th century that the Allouville oak tree, which had become an official curiosity, began to receive development and conservation care.

The interior of the chapels is lined with panelling, and the oldest parts of the trunk are gradually covered with wooden scales to protect them.

To facilitate access, a spiral staircase with balustrade is also being installed!

Bad luck, in 1912, he took a lightning strike, and lost half of himself.

Since then, work to help the oak not to fall, and to continue peacefully its life begun 1200 years earlier, has not stopped.

Of course, such an unusual tree could only attract cameras!

This is a technocratic project consisting in widening the road that passes through the middle of the village, and thus sacrificing the oak tree! The affair is hot, with barricades and beetroot throws to repel the market, and even becomes national to be finally decided by the president of the republic himself!

In this lively comedy, Jean Lefebvre, Bernard Ménez, Pierre Tornade, Jean-Pierre Darras, or Isabelle Gauthier, among others, are struggling vigorously.

The village, which still remembers it, keeps preciously photo albums, and, surprisingly, receives a wave of tourists every time the film is shown on television, on one channel on another!

Gardens of Etretat beyond the unusual

A chocolate museum in Normandy