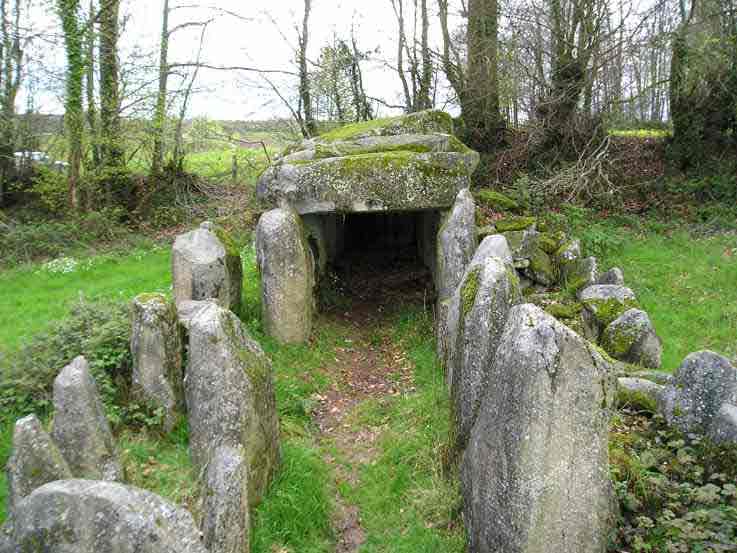 info_outline
You are here: Home / Regions / Normandy / 61-Orne / Beware of the Table to the Devil(s) of the Passais Woods!

Beware of the Table to the Devil(s) of the Passais Woods!

The oldest Norman megalith is surrounded by strange legends...

Where is the Table at the Devil(s)?

In the woods, of course! It is well known, it is always in the dark forests that enchantments or curses circulate!

More precisely, you will find it in the small commune of Passais, now part of the new commune of Passay Villages, in the Orne, to which it has contributed these 770 inhabitants!

Is it really old?

In the 1990s, excavations were carried out, and they were fruitful because they led to the discovery of bell-shaped ceramics.

The bell-shaped culture developed in Europe and South Africa during the third millennium BC (roughly!). And, at that time, curious ceramic cups in the shape of an inverted bell were produced (in the pictures, you will see an example of this), so we are certain that the megalith dates from this period, between 3200 and 2200 years B.C.

It is therefore entirely justified to classify it as a historic monument!

Why this name of Table to the Devil(s)?

First, because the people of the region could not understand how these blocks of several tons had been transported, assembled, erected without the help of the devil! That being said, it's indeed mysterious... !

But why do we sometimes talk about one devil, and sometimes several?

Quite simply, because, transmitted orally, there are about ten versions of the legend.

Sometimes it was a devil who helped to build the building.

But, also, and more often, it is a trap set by Devils: coins were scattered on the table. And if a human wanted to take it, he was violently thrown back and disappeared!

It would seem, however, that the rumour was started by some representatives of the Catholic Church seeking that their followers should not go too far to snoop around monuments that are supposed to shelter pagan cults!

The one I chose for this megalith about 3000 years old is a little special. Indeed, it is the result of the work of a Norman company (normal!), Arpanum, specialized in 3D modelling and virtual tours.

Thus, over the centuries, the techniques of our so distant ancestors, and those of our contemporaries, have come together!

Beware of the Table to the Devil(s) of the Passais Woods!

The ecomuseums of the Orne

Normandy: a network of 60 museums