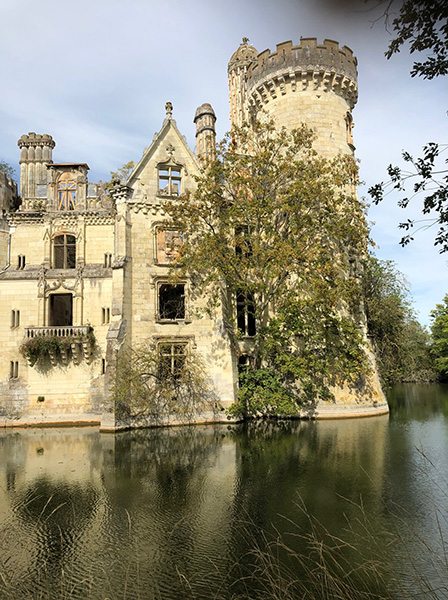 A romantic ruin unique in the world, saved by a method of financing at the very least original, is the Château de la Mothe Chandeniers, in Vienne (86).

But this department has, in its north-western part, a small growth, excuse me, a pretty peninsula, an almost almost island, which is located between the regions "Pays de la Loire" and "Centre Val de Loire", and more precisely, between Maine et Loire and Indre et Loire.

And the author of these lines, a native of Tours by birth, and a Maritalement saumurois, cannot therefore abandon this heritage! And all the more so since his own residence, located in Maine et Loire, is 19.9 kilometres from the castle (Mappy says so!).

So, without hesitation, let's annex!

Château de la Mothe Chandeniers is a neo-Gothic monument, begun in the 13th century and completed (approximately!) in the 19th century.

Bad luck, in 1932 a fire destroyed it and it was abandoned. And there he remains alone, all sad, on his microscopic island surrounded by moats filled with water, as he should.

Is it because of this aquatic environment, history does not tell us, but it is still the case that nature recovers its rights very quickly. And here the vegetation invades everything, that trees do not hesitate to sneak into all the openings, until they leave the dungeon, the whole forming little by little a decoration that Sleeping Beauty would not deny!

That being said, no kidding, it's really very beautiful!

In 2015, two young entrepreneurs who are passionate about our heritage are creating "Dartagnans", a participatory financing platform, which is quite common, but focused on safeguarding historical monuments, which is much less so.

They then met the founder of the association "Adopt a castle" (hey yes!), and following the video of a drone showing the castle of La Mothe Chandeniers seen from above, with its towers and foliage reflecting in the water, they decided to launch the campaign "Become a castle for 50 €".

The result: 27,910 Internet users from 115 countries answered the call. Each €50 tranche gives the right to one share of the company that owns the castle.

1200 "owners" came to voluntarily clear the ground, arrange the park, reopen the accesses, while the castle was consolidated and secured. It is true that a fall of stone, even medieval, on the head of a visitor would have been of the worst effect!

Since then, the company has tried to live and, if possible, to develop, seeking a delicate economic balance between opening the castle for receptions, offering accommodation and organising visits. We must really hope that it will work, because it would be a pity if Sleeping Beauty came back to lie down... the adventure is too beautiful!

You can give him a little help by going to visit him.

It's unusual, unexpected, romantic... and very beautiful (I already said it, I think)!

At the Dufresne Museum, a retro-mechanical heritage of 3000 pieces...

The superb vegetable garden of the Château de Villandry