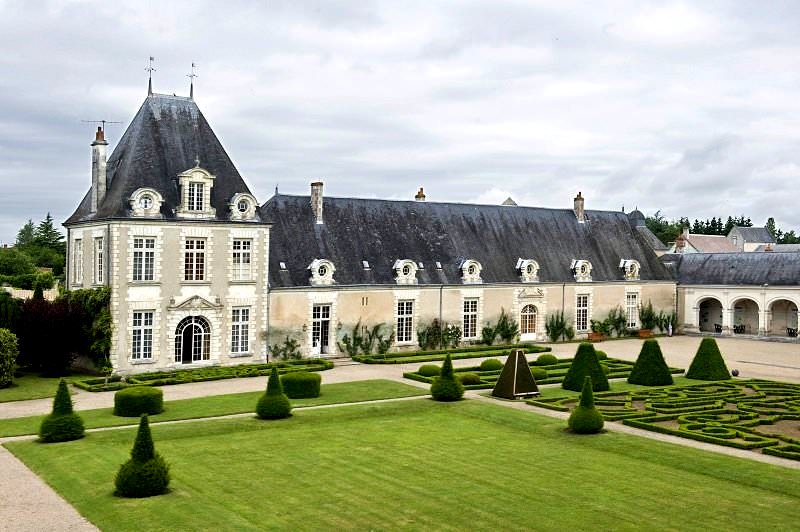 Like many castles, it was built from period to period, from the fifteenth to the eighteenth century.

The castle is richly furnished, each room being a harmony, the respect of a style. And it is fifteen rooms, magnificent, which are admired during the guided tour.

Azay-le-Ferron, the parks and gardens

The landscaped park itself has an area of 18 hectares.
Nothing has been planted at random, and it offers new scenes as you walk along the paths. On the outskirts of the building, the architecture echoes the boxwood embroidery and the topiaries.
A conservatory orchard has been created, composed of 160 trees for about 80 different species, the study of this ensemble was carried out by the "Croqueurs de pommes de Touraine", who also gave advice during the realization of a linear espalier orchard of vines, of 80 stocks for 40 varieties.
Finally, around the year 2000, a collection of hybrid remontant roses was planted, with 168 roses of 56 varieties.
As you can see, if you admire the rooms and furniture of the castle, you can find sweetness and harmony in the different pleasures of the park and gardens.
Don't miss the topiaries of the Cingé wing, whose layout and work of forms evoke the different pieces of a chess game!

The unusual visits of Azay-le-Ferron

During the season, the castle organizes unusual visits such as "In the footsteps of a servant", discovery of rooms, corridors and staircases that we never see, or "A sung ballad in the castle", or "Scandals in the castle", "Hidden treasures", etc....
Children are not forgotten either, since they are offered a costumed tour, with a final snack!

Shepherd lying on his back, or on his stomach?

Thevet-Saint-Julien... Your roots at the Museum of the same name!