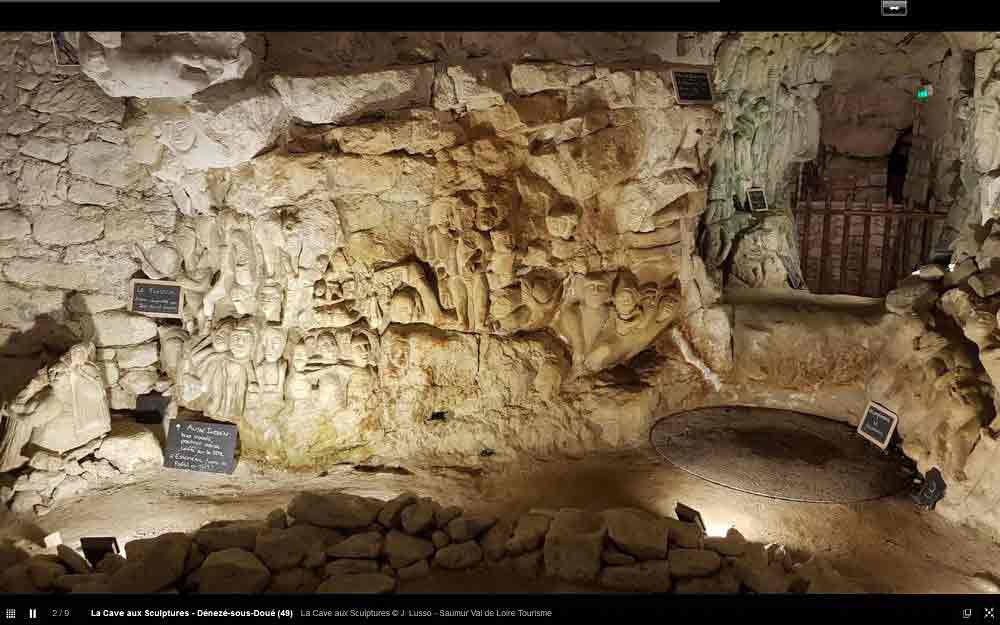 info_outline
You are here: Home / Regions / Loire Country / 49-Maine-et-Loire / In Dénezé sous Doué, a cellar with sculptures, but no sculptors

In Dénezé sous Doué, a cellar with sculptures, but no sculptors

The sculpture cellar a unique place in the West

If there is an unusual place, it is this one...

This huge cellar is an enigma, unique in the West!

Several hundred characters, faces, sculpted in volume in the tufa... A crazy saraband of demonic and angelic figures. A bacchanal of bodies adorned with sumptuous or naked costumes... No concern for proportions, for this truculent frieze.

If some groups, some scenes, remain totally incomprehensible, we sometimes spot, in this kind of comic strip of the history of France, some known characters like Catherine de Médicis, or Diane de Poitiers, for example. By the way, the mysterious sculptors did not hesitate to go as far as the "scoop" worthy of what we would call today "the people's press". Thus, Catherine de Médicis is represented in her court clothes, while the king's mistress, behind her, is represented "topless"!

The cellar had already been discovered twice, most probably on the occasion of collapses in 1663 and 1740, but as these uncovered naked bodies and grimaceous figures were immediately considered diabolical, the priests of the time may have thought that it was a place of pagan worship. Anyway, they rushed to bury it all!

The site was rediscovered in 1956 and then classified as an additional inventory of Historic Monuments.

A difficult rebirth, for the cellar with sculptures....

The municipality has devoted significant sums of money to the development of the site intended to make it accessible to the public, starting in 1977. On the other hand, the fact that it was once again open and visited favoured the appearance of mushrooms, mosses, saltpetre... To fight against these phenomena, and to contribute to making this place a very educational site for the population, the "cave aux sculptures" received support from the Bern mission.

Walls in the vineyards...

The unusual on shelves!

To visit without moderation!

Baugé: the inhabitants create their museum