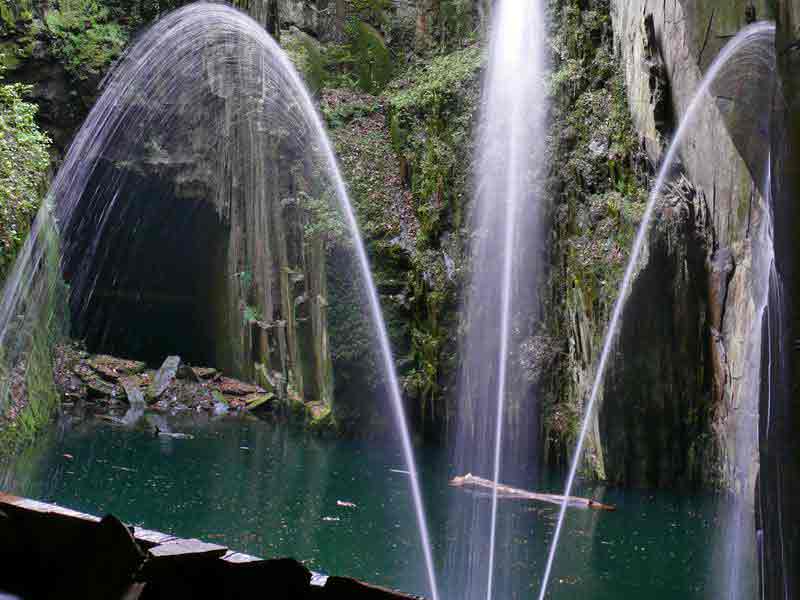 The site housed extremely important slate mines, but which gradually declined until they disappeared in 1891 under the combined effect of three factors: a significant decline in the construction industry, a shortage of nearby means of transport due to a lack of railway lines, and fierce competition from Anjou (see the article "the blue mine"). And from 1891 to 1994, they remained unexploited.

Indeed, it was in 1994 that, after major improvements, they were opened and now offer in a "Souterroscope", a unique and particularly unusual visit.

The visitor will discover impressive underground rooms, as large as cathedrals.

In the first, he will finally see, with his own eyes, the famous groundwater of which he is told all the time on weather reports, explaining that it is too low, or that it is being reconstituted! He will also see an interesting film on the water cycle.

In the second, it is the wonder of the play of water and light, symbol of the alliance between the mine and man.

Third cinema: a cinema with a film entitled "l'or bleu de Caumont", dedicated to the extraction of slate.

Finally, in the third room, he will undoubtedly admire with a certain amazement, a quite extraordinary collection of giant crystals and semi-precious stones.

In short, the "Souterroscope des Ardoisières" is a fabulous underground journey, both educational and magical!

Normandy: a network of 60 museums

At the Museum of Automata, things are moving!

War report in 1066: the Bayeux tapestry