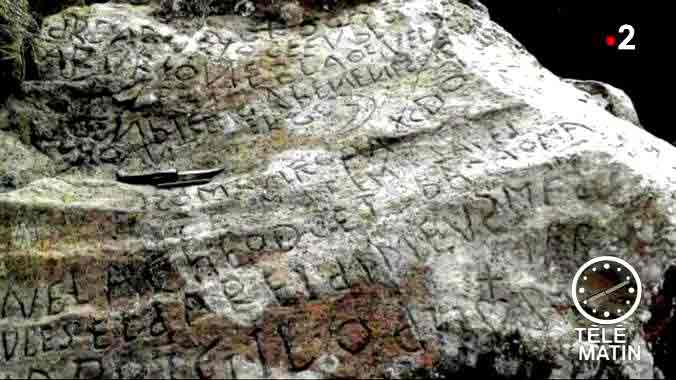 info_outline
You are here: Home / Regions / Brittany / 29-Finistère / Plougastel-Daoulas: 2000 euros to whoever deciphers the enigmatic text of the mysterious rock!

Plougastel-Daoulas: 2000 euros to whoever deciphers the enigmatic text of the mysterious rock!

Yes, they would like to know, in Plougastel-Daoulas, what this engraved text, which includes letters, numbers, symbols and drawings, means, to say the least, in an unusual way!

Already, you have to wait for low tide. Then you have to follow a small path in the hamlet of Illien ar Gwenn (there are 182 hamlets in the commune), and go up the shore towards the cove of Caro. The rock is then situated between the point that juts out into the sea and the cliff. The view is superb, but don't spend too much time looking at the inscriptions on the rock: the sea is rising!

What does it say?

It is entirely engraved on one of its faces, and one suspects that it is not one of those famous "damn who will read it", or "he who says who is there", famous in schoolyards, that whoever did this went to so much trouble... It's granite, anyway!
There are letters, generally in capitals, two dates (but this does not necessarily give the date of the inscription... We can write, in 2019, "in memory of the 1914 war"!), there are symbols (the Chouan heart, for example), and drawings (including a small sailing boat).
But it is impossible to understand the meaning of all this!

Who will decipher it?

To solve the mystery, the commune has launched a national appeal, with a 2,000 euro bonus!
And the call is heard! In May 2019, there were already 2000 applications filed!
It is a jury made up of academics from Brest, including linguists, the mayor of Plougastel-Daoulas, Dominique Cap, and the project manager, Véronique Martin, among others, who will have to analyse all the proposed leads. The city council specifies which files must be based on serious and contextualized arguments.
At the end of November 2019, a hypothesis will be retained, and the prize will be awarded, but... will the mystery really be lifted? I'm not sure, but...

The Plougastel-Daoulas rock: it is talked about all over the world!

In the meantime, the story goes around the world!
Under the title "Can you decipher the code", the very British Daily Mail devotes an article to it, and publishes a map!
In the United States, CNN and Fox News, just that alone, relay the call from the town hall!

And there's talk of a visit from a Japanese television channel!
Fame!

Two ex aequo winners among the 61 answers provided, from all over the world!
One is from an English graduate with a degree in Celtic studies, and the other from a reporter, writer and author, who worked with a comic book artist and author!
In both cases, it is about a soldier who would have perished at sea, the facts being related on this famous stone by another soldier, friend of the first, the latter even expressing, it seems, a certain anger. However, two dates appearing in the text, 1786 and 1787, correspond more or less to the installation of batteries intended to defend the roadstead of Brest.

From there... all that remains is to decipher the details of the story! You can always try... the municipality has decided to improve access to this famous rock!

Brest: The colorful cabins of the White House

The Breton tulips of the Torch, in Plomeur

The Garden of the National Botanical Conservatory