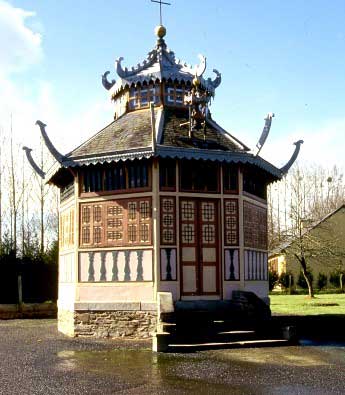 Unusual and unique, a Chinese pagoda in Ille et Vilaine

L'Ille et Vilaine has a lot of charm, and has many surprises in store. But still... from there to welcome a Chinese pagoda! And yet, it's true!

China is far away!

But the small town of La Selle-Guerchaise offers a rural shortcut... follow me!

From the campsite parking lot (yes, I know, for the moment it's not very rural! But, well... follow me, I tell you!), from there, so, take to the right the small path that leads to the bodies of water where trout and pike await the quiet fisherman.

Peacefully circumnavigate the three bodies of water and then continue on the path, between rushes and reeds, between dragonflies and frogs... so it's rural, isn't it?

At the end, take the small road that leads to the village of Le Pâtis, and you will find the Sainte-Anne chapel, a real 19th century Chinese pagoda! The unusual nature of the encounter produces a striking effect!

And we understand that this place attracts about 3000 visitors per year, which is quite considerable, for a small village with about 170 inhabitants and a little more than sixty houses!

The pagoda of La Selle-Guerchaise, named Sainte-Anne's Chapel, is not only very unusual, but it has also arrived there in an equally unusual way, in small pieces, in kit form!
At the end of the 19th century, it was Father François Lizé who brought it back from Indochina to be assembled where it is today. This abbot was rector of the parish from 1875 to 1878, and returned to China to die in 1887.

This octagonal pagoda, unique in France, houses a wooden statue that was on the façade of a village house, and to which miraculous virtues were attributed.
This statue is very curious, since it represents Jesus' grandmother, carrying the virgin in her arms, herself holding Jesus as a child.

There is also a polychrome statue of Sainte-Anne, dating from the 16th century.

The largest fortress in Europe...

The tide gauge of Saint-Servan, zero point of the sea level...