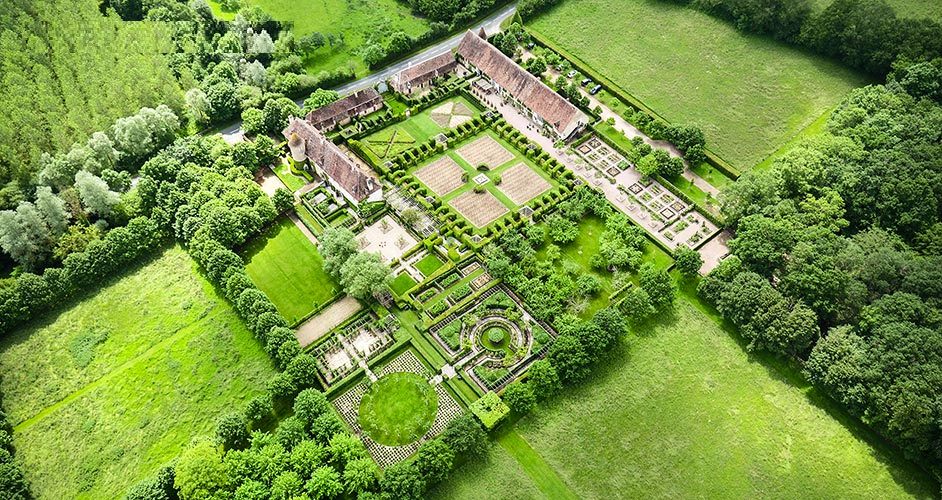 We are well beyond the term "unusual"... extraordinary, magically organized, would be, rather, the least we can say!

The priory itself was founded in 1107, by Robert d'Arbrissel, creator of the abbey of Fontevraud, in Maine-et-Loire. And, at his death, the legend indicates that his heart would have remained at the priory, this being remembered today, in the garden, by a plant heart...
The creator of the garden bought the priory in 1991... and it was a ruin! As for the garden, it only had three pear trees!

The ensemble that has been created is therefore completely contemporary, while being inspired by the medieval garden, certain installations having been taken from period illuminations, such as, for example, the vine on wooden fences.
As this is a priory garden, the religious symbolism led the gardener... In one part, we will find wine, bread and oil. With the vegetable cloister, we have an evocation of the lost paradise, with, in the center, the fountain with the four exits which represent the four rivers of Eden. The rose garden is the garden of Mary...

The gardens of the Priory are composed of twelve enclosed areas, with different purposes, a set that was found in the gardens of monasteries to be able to live in autarky, and everything is very beautiful, very controlled, very balanced ... go stroll, dream, admire, meditate ...

Koi carp in the Cher !

The ochre in memory...