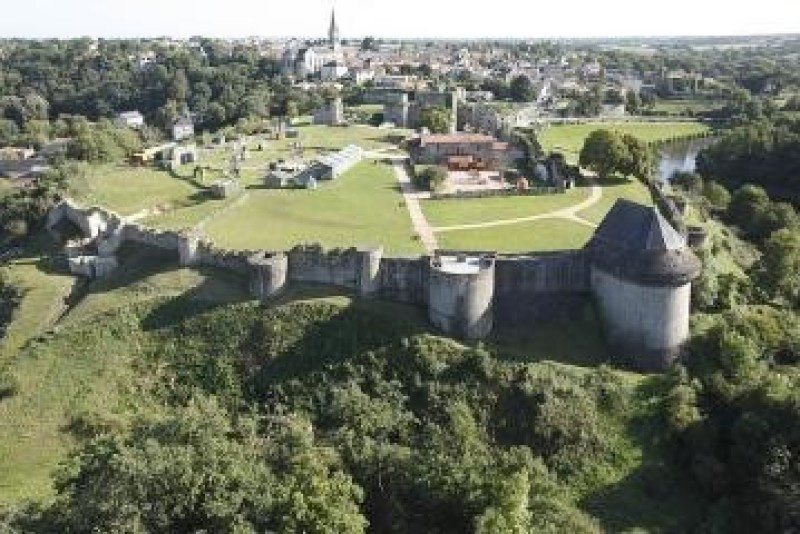 The castle of Tiffauges may have accumulated superlatives, but it has a nickname that would have gone by without: it is the castle of Bluebeard!

The castle of Tiffauges, the most imposing castle in the Vendée

In fact, to be exact, it would be better to say "the most imposing medieval ruin in the Vendée".

To defend themselves from the formidable barbarians, the Normans, castles were built in places that seemed adequate, that is, preferably at a height and with a clear view! The Tiffauges site met the specifications!
Towards the end of the 11th century, the castle belonged to the powerful viscounts of Thouars, and it seems that it was Geoffroy (Geoffroy de Thouars, of course...) who began the construction of the current castle, in the early 12th century. He obviously did not know that, after many setbacks, and having become a splendid ruin, this castle would be classified as a Historical Monument in 1957.

The castle of Tiffauges, a unique conservatory in Europe.

The castle houses a conservatory of medieval, reconstructed war machines, absolutely unique in Europe, and it was the first site in the world to present live fire demonstrations to the public in 1992. And beware, it's not nothing: Several centuries before the powder artillery, huge throwing machines demolished the walls of castles by throwing projectiles weighing several hundred kilos!

You will discover the medieval crane (with squirrel cage!), the shooting of the tinker on the rampart, the stumbling block, in short, all kinds of very useful machines to crush the one opposite! We've done better since then, but still....!

Bluebeard is a legend, a tale of which Charles Perrault gave the most famous version, in "Les contes de ma mère l'Oye", in 1687. But he thinks that this story has its source in that of Gilles de Rais.

His career had started out pretty well.

He is particularly known for having fought the English, whom he had to drive out of France, and this alongside Joan of Arc. He contributed to the lifting of the siege of Orléans, then was promoted to Marshal of France on the very day Charles VII was crowned in Reims. Not bad, is it?

But where it gets worse is when he retires to his land, to the Château de Tiffauges, for a well-deserved retirement...
He must be bored a little, and, as a result, from banquet parties, he spends everything. He ruins himself, and even sells the estate in small pieces, which doesn't please the family very much!

And, above all, he brings in women, a lot.
The problem is that they don't leave again, and that ends up making people talk...

And he adds children, a lot. And they too are disappearing.

In short, when he is tried, we are talking about several hundred people!
The "serial killer", as we would say today, was finally condemned to be hanged and then burned.
So, his story may have inspired Charles Perrault, but he still leaves a bad image to the castle!

Le Moulin de Rairé has been running since 1555, without interruption!