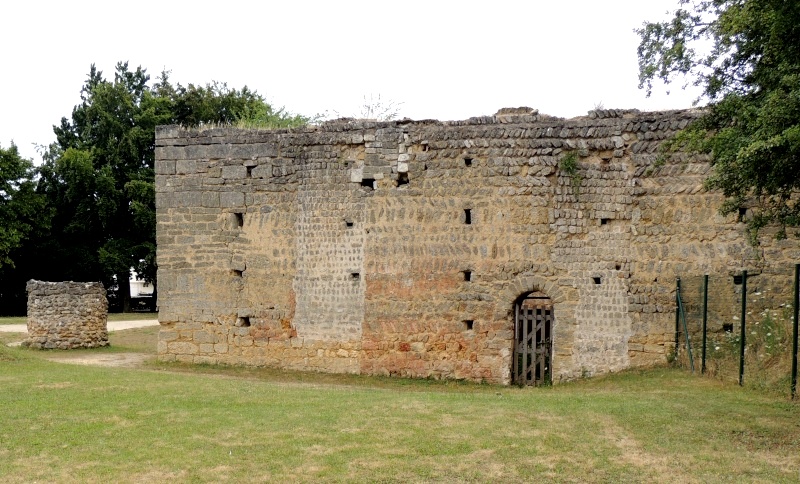 The son of Charlemagne in Doué La Fontaine

As everyone knows, Charlemagne had six children, and his fourth son, Louis the Pious, born in 778, became king of Aquitaine in 781 at the age of three. Let's skip the details of his life, which would make this text too long, and simply note that, many years later, he had four residences, including the palace of Doué. And it was in this palace that the news of the death of Charlemagne, his father, was brought to him, which, at the same time, made him the emperor.

Let us dream a little...

Here we are, today, in front of a Carolingian house of 23 by 17 meters, with walls about 1.75 meters thick. The walls are pierced with two doors, and holes in the thickness of the walls suggest that it was possible to barricade them with large beams.
There are mainly two large rooms, the largest of which is 178 m² with a central fireplace.

There are also the remains of a fireplace in the other room, which is thought to have been a kitchen.

And one can dream a little by imagining the game on spits turning in the hearth, and the music of the minstrels...

The Vikings were very active at the time, and, during ferocious expeditions, they happily plundered Angers, Saumur, Chinon, among others... The inhabitants, seeking to protect themselves, adopted troglodyte dwellings when they could, and notably in Doué. It has been gradually discovered that the famous palace of Louis the Pious, in Doué, would have been destroyed by these ugly Vikings, and that the Carolingian residence still in existence would have been built, in fact, in the 900s, for Count Robert, future king of West Francia.

One can still dream of those remote times in front of one of the very rare Carolingian houses that remain in France...

Flowers for your health....

Museum of the motor, from the Solex to Ariane

One, or two, or three guinguettes on the banks of the Loire...