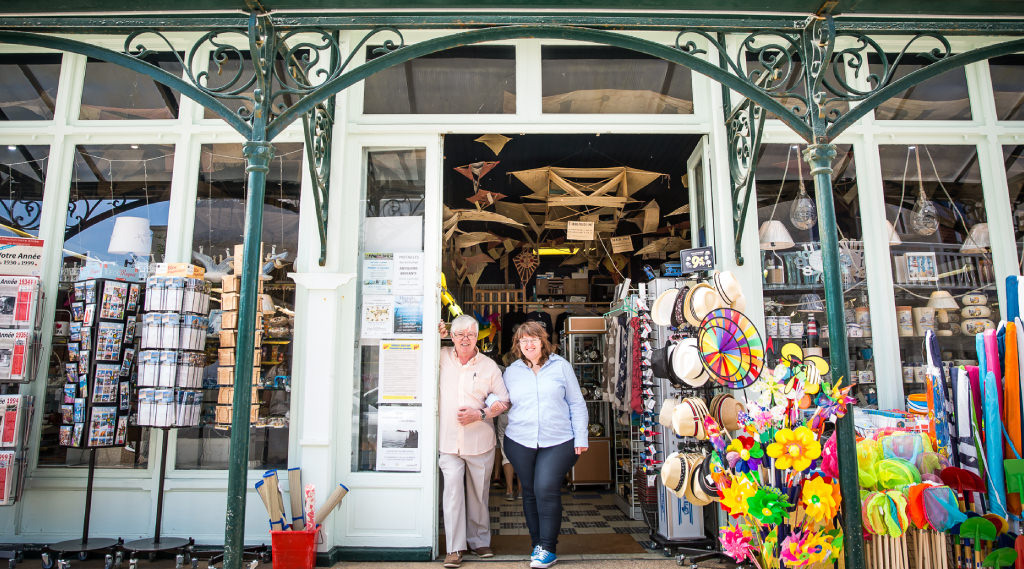 info_outline
You are here: Home / Regions / Loire Country / 44-Loire-Atlantique / Eiffel and kite at the bazaar...

Already, when you arrive in front, you find yourself in front of a very large store obviously inspired by Gustave Eiffel, which is a bit surprising... in Loire-Atlantique!

Then, when you enter, you realize that almost all the products on display are local, and full of history: the unmissable salted butter caramels and Brittany pancakes, the shortbread with fleur de sel, the first name bowls from the Pornic earthenware factory, for example...

A family business, to say the least...

Since 1900, five generations have succeeded one another!

The great-great-grandfather of the current manager says that he was inspired by the Pavillon Baltard in Paris, and at the time, moreover, the store was called "Grand bazar parisien". It only opened in the summer.

In this family, we have ideas!

Not only did the founder had the idea to be inspired by Gustave Eiffel, which immediately gave his store an unforgettable aspect, but there was another, who in the 1910s had partnered with a manufacturer to produce ... kites!

It was, at the time, a toy for children of good family.

The production was initially to be sold in a Parisian store. But the son of this entrepreneur had, in addition, the intuition of the development of the kite in parallel with the development of leisure activities of wealthy families. And, as a result, manufacturing is "relocated" to Prefailles, and the kite becomes advertising. In short, when you buy something in the store, you win vouchers that then allow you to win a kite ... in the colors of the product purchased!

On the other hand, little by little, the "craft" materials used to make the kite, bamboo, poplar, cotton, umbrella ribs for the span, etc.. were replaced by plastic, among others, in a manufacturing increasingly democratized, and the factory finally closed in 1985.

Many kites were left to sleep in the attic, and it was another family member who discovered them in 1990.

And, of course, he exhibits this treasure, presenting a collection of kites 1900 unique in France. This is the one you can admire today. Just raise your nose!

In Nantes, La Cigale, perhaps the most beautiful brewery in the world!